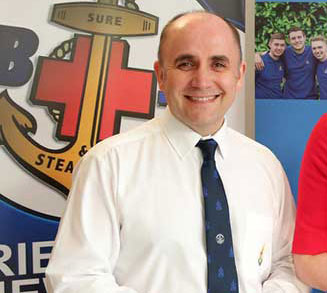 Congratulations to David Blevins, a member of our Old Boys’ Association on being awarded the European Journalism Institute’s Freedom of the Press Award for 2019.
2019 marks thirty years in journalism for David, which includes twenty years at Sky News, where he is currently the station’s Ireland correspondent.
David received his award at a ceremony at Charles University, Prague, Czech Republic on Saturday, July 13.
David, who was a former Company Captain at both First and Sixth Portadown BB companies, as well as ex – President of the Portadown and District Battalion is still heavily involved with Boys’ Brigade through his role as Northern Ireland District President. He also attended our Annual service this year, where he read one of the scripture lessons.
Once again, congratulations to David from all in the Association on this highly prestigious and richly deserved award.