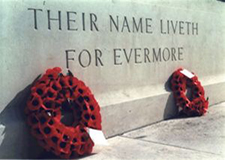 A number of young men from many walks of life went off to fight ‘the Hun’ went war broke out in 1939. The military-like background that the Boys’ Brigade had provided young men led many down the path of the recruiting sergeants and the members of the Old Boys were no different. Over the course of the next 6 years many experienced life changing events and some paid the supreme sacrifice. The Association is proud to be linked with the following members who did just that. Their names will never be forgotten. 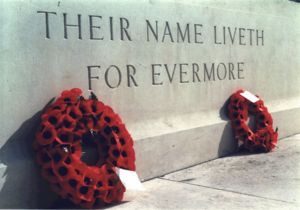 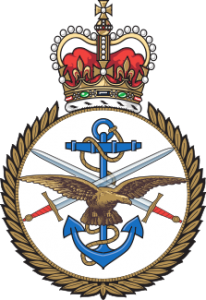 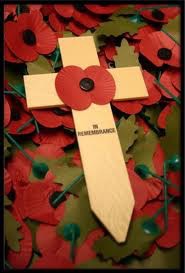 ‘WE WILL REMEMBER THEM’ 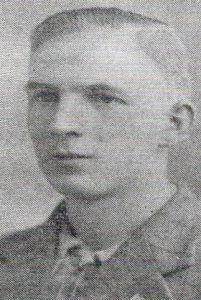 Wilfred Wright, Aircraftman 2nd Class 103 Squadron RAF, died 4th January 1940 aged 20. Wilfred was the son of James & Esther Wright who lived at 12 Burnbrae Avenue Portadown. He is buried in Drumcree Church of Ireland Graveyard.
Wilfred was a member of the 1st Portadown Company BB and had been employed in Tavanagh Weaving Factory prior to joining the Airforce.
His brother Earl also served with the RAF during the Second World War. Wilfred is commemorated on Portadown War Memorial and on the War Memorial of Thomas Street Church. 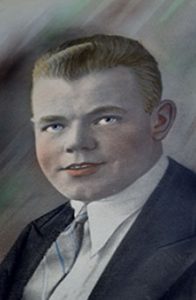 Samuel Webb, Driver Royal Army Service Corps, killed in action on 2nd June 1940 at Dunkirk, France. He was aged 25 and was the son of Edward and Susanna Webb who lived at 45 Mourneview Street Portadown. He has no known grave. Samuel was employed by Anderson’s grocers of Church Street prior to the war and had been in the army about 4 years

before he was killed. He is commemorated on Dunkirk Memorial in France and on Portadown War Memorial, 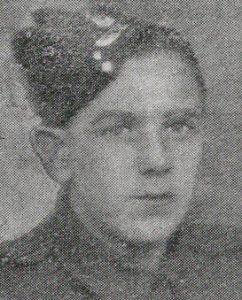 Thomas Dawson, Pilot Officer 144 Squadron RAF, lost in air operations on 1st November 1940 on a bombing mission to Berlin. He was 20 years of age. Thomas was the son of William Joseph and Sarah Dawson who lived at Rosnaree Eden Crescent, Portadown. He too has no known grave. Thomas is commemorated at the Runnymede Memorial Surrey in England, the Portadown War Memorial and the Portadown College War Memorial, where he had been a pupil. 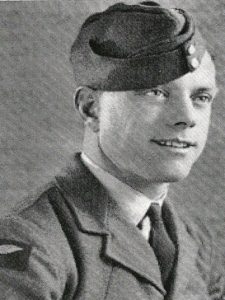 David Todd, Sergeant RAF, lost in air operations on 30th August 1941 while a returning to his unit in the Mediterreanean. He had been previously wounded in 1940 and had spent some time in hospital in England prior to returning to the war. He was the son of Robert and Ann Todd who lived at 72 Hanover Street Portadown and was 29 years old when he died. He has no known grave. He was employed in the office of Spence Brysons before enlisting in the RAF. He was also a member of 1st Portadown BB Old Boys Silver Band. David is commemorated on the Malta Memorial and Portadown War Memorial.

George Pentland, Gunner, Royal Artillery, died as the result of an accident in England on 20th September 1942. He was the son of Robert and Jane Pentland of 29 Carrickblacker Road, Portadown. He was aged 27 when he died and is buried in Seagoe Cemetery Portadown. George had been a member of Seagoe Church Lad’s Brigade but became a member of the Old Boys prior to going to war. He is commemorated on Portadown War Memorial and on Seagoe Parish Church War Memorial.

David Gillis, Sergeant (Air Gunner) 90 Squadron RAF (VR), was killed on air operations on the way to Germany 22nd June 1943, He was the son of J. Gillis of 31 Victoria Terrace Portadown and was a sergeant in the 1st Portadown Company BB. Aged 24 he had been sent as one of a crew of seven on a bombing mission to Krefeld. His aircraft was shot down by a night fighter and crashed at Hoogwoud, North Holland with the loss of all the crew. David is buried in Bergen General Cemetary, Netherlands. He is commemorated on the Portadown War Memorial and the memorial in Thomas Street Church.

David McClatchey, Rifleman, 2nd Battalion The London Irish Rifles, Royal Ulster Rifles, died of his wounds 10th August 1943 in Italy/Sicily. Aged 30 David was the son of Edward and Isobel McClatchey of 22, Queen Street Portadown. He was married to Carol McClatchey and they resided at 2, Mons Villas, Armagh Road, Portadown. David was wounded in the head during the invasion of Sicily, was captured by the Germans and died undergoing surgery in an enemy hospital. He has no known grave. He is commemorated on the Cassino Memorial, Italy, Portadown War Memorial and the War Memorial of St. Mark’s Parish Church.

Ernest Bramwell Blair, Sergeant 578 Squadron RAF (VR), was lost on air operations over Germany on 13th April 1944. He was on a bombing raid to Berlin when his aircraft crashed due to engine trouble. Ernest was the son of John and Martha Blair. He has no known grave and is commemorated on the Runnymede Memorial Surrey and Portadown War Memorial. 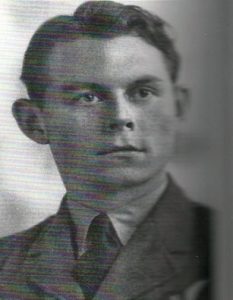 Joseph Clayton, Sergeant (wireless operator/air gunner) 218 Squadron RAF (VR), son of William and Elizabeth Clayton of 2, Eden Avenue Portadown. Aged 24 Samuel was killed on air operations on 2nd May 1944 in France. Samuel was keenly interested in the Royal Air Force and achieved his lifelong dream when he was accepted for aircrew training. He was posted to Squadron 218 of Bomber Command. Samuel was one of a crew of eight in a bomber which took off from Woolfox Lodge Base to destroy railway lines and storage depots at Chambly in France. The operation was part of the bombing offensive in the lead up to the Normandy landings on D Day. His plane came down at La Housaye near Auneuil with a loss of 4 crew, including himself. All four were buried in Poix de Picardie Churchyard, Somme, France. The four surviving crew all evaded capture. Samuel is commemorated on Portadown War Memorial.

Robert Buckley, Constable, Royal Ulster Constabulary, aged 31 was killed on duty in the Ardoyne area of Belfast on 26th February 1971 when IRA gunmen opened up with automatic weapons behind the cover of a rioting mob. Attached to the RUC Special Patrol Group he had joined the Police in 1958. He was a native of Portadown but was residing in Belfast at the time of his death. Well known in RUC football circles Robert left behind two daughters aged three and one

Andrew Wood, Private, Royal Irish Rangers, was a single man who tragically died on guard duty in his barracks at Mahon Road Military Base in Portadown in 1997. He was a Private in the 3rd Battalion the Royal Irish Regiment. 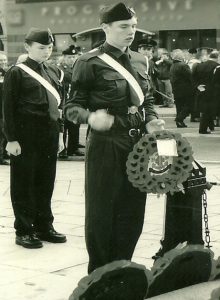